The Mahindra Thar CRDe Adventure Edition will be available in a single paint shade of 'Java Brown'. 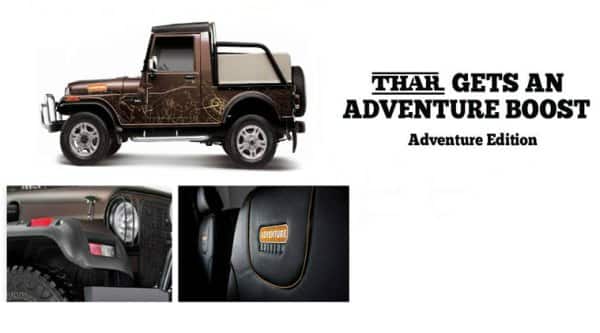 The Mahindra Thar CRDe Adventure Edition will be available in a single paint shade of ‘Java Brown’.

Mahindra has given a fresh breeze of newness to it’s capable SUV Thar, by launching a limited edition variant of the Thar CRDE. The special edition variant, which is named as Thar CRDE Adventure Edition, has been revealed on the official facebook page of Mahindra Thar. This new variant will be produced in a limited run of only 30 units to commemorate the ongoing festive season. Adding to the factor of exclusivity is the fact that the SUV will be available in select dealerships only.

The Mahindra Thar CRDe Adventure Edition will be available in a single paint shade of ‘Java Brown’. The other accessories with which this variant is adorned with are body graphics, headlamp and tail lamp protectors, chaff screen in front of the grille, front bull bar and wheel-arch extensions housing the turn indicators. The interiors of the SUV are also spruced up as it gets new black seat covers with contrast orange stitching, redesigned center console with harness points and moulded floor mats, which intend to make the vehicle adapt to the conditions of camping and off-roading with ease.

Mechanically though, the Thar CRDe Adventure Edition is powered by the same 2.5 liter diesel engine which is available in the regular Thar CRDe. The oil burner is good enough to churn out 105PS of power and 247Nm of torque, and is coupled up with a 5-speed manual transmission. The sheer off-road ability of the SUV is proved by the presence of Borg Warner four-wheel drive transfer system and 200mm ground clearance, assisted by sharp approach and departure angles. On the price front, though Mahindra hasn’t revealed the actual price of this limited edition variant, it is speculated to carry a premium of Rs.30,000 to 40,000 more than the Thar CRDe, which currently retails for Rs. 7.37 lakh.