Former Chief of Army Staff: Will begin signature campaign against apartmentalisation in Haryana

While addressing a rally in Jammu during the ongoing Bharat Jodo Yatra Monday, Singh had said there was no proof of these surgical strikes took place but tried to backtrack amid a furore over his comments.

Gen Malik, who led the Army in evicting Pakistani intruders from the Kargil heights in 1999, said, “The Chinese occupation was premeditated and it is apparent from their statements that they are in no mood to withdraw.”

Gen Malik, who led the Army in the successful eviction of Pak troops, said, in an interview to The Indian Express, that an aggressive China, besides nibbling at Ladakh, could also attempt to take control of Karakoram Pass and the area between it and Shaksgam Valley ceded to it by Pakistan.

Two civilians were killed when Army personnel fired at a stone-pelting mob in Ganovpora village in Shopian on January 27, prompting the chief minister to order an inquiry into the incident.

In an email to former Navy chief Admiral Sureesh Mehta, Malik wrote that the PMO had called him on August 10 to “resolve the issue” so that OROP could be announced on “15th of August”.

Gen V P Malik was one of the people who had pushed the idea of setting up a separate tribunal for delivering speedy justice to soldiers.

The former Chiefs objected on mixing the 'Sadbhavna' operation with the illegal funding issue. 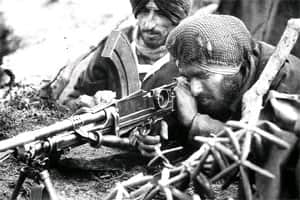 No pride in what politicians have done

Former Army Chief General V P Malik on Friday said that the days of interaction with the Army through the bureaucracy are over.