Raangi movie review: Trisha's latest is baffling and questionable. It's unfortunate that after a great comeback as Kundhavai in Ponniyin Selvan this year, the actor ends 2022 on such a low note.

Trisha on 20 years of being the leading actor: ‘More than hard work, I think you need a bit of luck’

Trisha recently opened up about playing the female lead for 20 years, Thalapathy 67, her upcoming film Raangi, and more.

Who's the bigger star — Vijay or Ajith? Trisha weighs in

Trisha reacts to the debate over who's the bigger star between Vijay and Ajith Kumar.

Raangi, starring Trisha in the lead role, has been bankrolled by Subaskaran under the banner of Lyca Productions. The film will finally release on December 30.

Fans were seen cheering for Trisha as 2004's Varsham was screened at a theatre in Hyderabad.

Ponniyin Selvan I: Mani Ratnam's magnum opus is a crash course in how to overcomplicate a straightforward story

The cast and crew of Ponniyin Selvan: 1, including Mani Ratnam, Trisha, Vikram and Aishwarya Rai Bachchan, got together to celebrate the film's huge box office success. 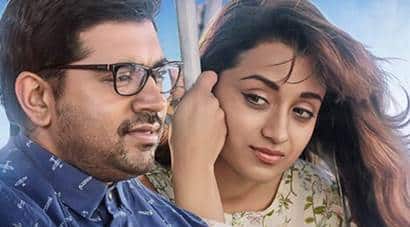 Hey Jude was cleared by the censor board with a clean 'U' certificate paving the way for its theatrical release on February 2. The film, written by Nirmal Sahadev and directed by Shyamaprasad, stars Nivin Pauly and Trisha.