Bollywood has been disrespecting New Delhi for decades, but these 8 films (and shows) capture the capital's wicked wisdom | City in Cinema

New Delhi might be the most cinematic city in the country, and its relative underrepresentation in our films only adds to its mysterious aura.

‘If I am not adding to a debate, why make a film?’

Director Kanu Behl on his second film, Binnu Ka Sapna, and why story is still not the king in Hindi films

"A sum of Rs 375 crore has been earmarked for worst-affected Ganjam, Gajapati and Rayagada districts," said Special Relief Commissioner (SRC) B P Sethi.

Women rush to name newborns after cyclone 'Titli' in Odisha

During the super cyclone in 1999, where about 10,000 people were killed, the parents had named their babies after the name of the calamity.

Sixteen blocks across the state have received more than 200 mm of rain and three rivers are flowing above danger mark.

A Wishlist for 2016: Salman, SRK, Akshay freshness is the only way forward

Give us change, and we will happily give you money, and that precious commodity of all, our time. 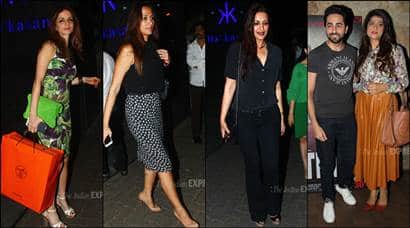 While Hrithik Roshan's ex-wife Sussanne Khan was seen enjoying a quite dinner with her friends a day after her birthday (October 26), Ayushmann Khurrana watched Dibakar Banerjee's 'Titli' with his wife.