Bachchans are seen smiling for the camera in the Ambani-Bachchan portrait from Anil Ambani-Tina Ambani's son Anmol's wedding.

Their wedding reception decor had themes of white, green and golden. There were flowers and foliage

The photo seems to be from the mehendi ceremony of Tina and Anil Ambani's son Anmol Ambani and Krisha Shah.

International Day of Families is observed on May 15 every year

The photos were clicked on several occasions, from birthday parties to weddings and other family functions

Am a housewife,didnt know the details of business: Tina Ambani

Tina Ambani also claimed that she was a housewife and a social worker.

Tina Ambani said she did not have any role in Reliance ADAG as she was just a housewife.

The finance ministry has cleared the proposal to that will augment foreign exchange inflows in the brownfield pharma sector.

Tina Ambani,who has been summoned as prosecution witness in the 2G case along with her husband Reliance ADA Group Chairman Anil Ambani,today moved a Delhi court seeking exemption from personal appearance before it on August 23 citing prior commitments.

The court has summoned Anil Ambani and Tina Ambani for August 22 and 23 respectively for recording of their statement in the case. 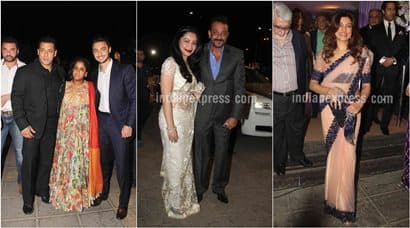 It was the traditional festival of Karva Chauth on Saturday (October 11) and just like the other Indian women, movie personalities too celebrated it with much pomp and show.