Vijay Gokhale writes: Jiang Zemin led China through a tumultuous time, exercised power with a light touch. The contrast with the current one-man leadership is stark for Chinese people.

Amid protests in China, recalling Tiananmen Square: What happened that day, what led up to it

Tiananmen Square did not happen in a day — factors over decades led up to it. Here's its history.

Mourning Tiananmen’s victims, and the Hong Kong that was

On Saturday, smaller crowds gathered in Taipei, Taiwain, and other cities around the world — this time mourning not just the people slain 33 years ago but also the fate of Hong Kong.

Explained: Why China is cracking down on Hong Kong's memorialisation of the Tiananmen Square massacre

Since 1990, tens of thousands of residents have gathered after sunset at Hong Kong’s Victoria Park on June 4 for a candlelight vigil. For the past two years, however, Hong Kong police have banned vigils by citing Covid-19 restrictions, which critics argued were being misused by authorities.

June 4 marks the anniversary of Chinese troops opening fire to end the student-led unrest in and around the square in central Beijing.

Replica of Hong Kong’s ‘Pillar of Shame’ unveiled in Norway; know more about the historic sculpture

A slogan painted across a bridge to remember the victims of the 1989 Tiananmen Square massacre has been boarded up. The decision is the latest in an effort to censor a topic considered taboo on the mainland.

Hong Kong news outlet to close amid crackdown on dissent

How democracy was dismantled in Hong Kong in 2021

Returned to China in 1997, Hong Kong has endured an overhaul of its political system and a crackdown on political dissent.

Hong Kong authorities have cracked down on political dissent following the implementation of the national security law that appeared to target much of the pro-democracy movement. 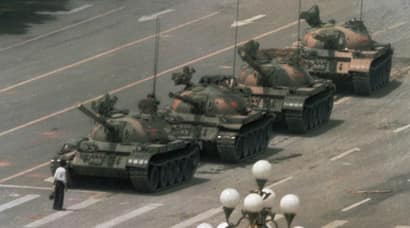 Tiananmen Square in 1989 and now

China allows no public discussion of the events of June 3-4, 1989, when soldiers killed hundreds of unarmed protesters.