Dust storms originating as far away as Iran are known to adversely impact Delhi’s air quality, as was seen in 2017.

The study illuminates the environmental conditions that allowed Acheulean populations to thrive at the margins of the monsoon in the Thar Desert until at least 177,000 years ago.

The Thar desert has been one of the largest natural laboratories for evolving innovative 'designs' that ensures adaptation and survival of its constituent species.

Gas leak in Thar: Efforts on to plug well

The broach occurred during a 'workover' — industry jargon for repair interventions —at Oil India Ltd’s Dandewala well in Jaisalmer.

The desert inflicts an incomprehensible influence on me: Alfredo de Stefano

The arid land of the world has been a muse for photographer Alfredo de Stefano for years now.

In particular,the Thar desert and the Kutch have been identified.

For 25-year-old Delhi-based photographer Ankit Goel,a chai tapri is his most interesting muse. 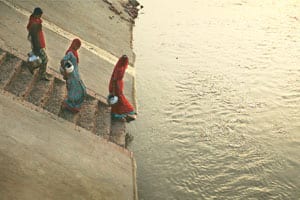 It's taught them means to pursue new livelihoods,fed dreams and changed fortunes. The Indira Gandhi canal will remain closed for three months starting next week for extensive repair work. Since it became functional two decades ago,and made arid lands hospitable,a lot has changed in the way residents of north and western Rajasthan perceive life in the desert. A look at why it remains the lifeline in the region.