According to the notification, Arshdeep is very close to Hardeep Singh Nijjar, a designated terrorist under UAPA, and runs terror modules on his behalf.

Who is Dr Asif Maqbool Dar, the Saudi Arabia resident declared a terrorist by MHA?

A notification issued by the MHA states that he has been associated with the Hizbul Mujahideen and is "involved in instigating the youth of Kashmir Valley for terrorist activities by using social media."

Kashmir zone Inspector General of Police Vijay Kumar on Sunday night said Two Jaish-e-Mohammad militants, including the killer of constable Reyaz Ahmad, were trapped in the encounter with security forces.

Consignment was dropped via drone from Pak, was being taken to Telangana: Cops

"It has come to the fore that two wanted terrorists Abdul Samad and Iliyas can escape to Nepal from Uttar Pradesh," IG (Basti range) Ashutosh Kumar said.

Explained: What are the UAPA amendments? When is an individual designated a ‘terrorist’?

The existing UAPA law specifies that only officers of the rank of Deputy Superintendent or Assistant Commissioner of Police of the NIA shall have the power to investigate offences under the UAPA law. The Bill seeks to allow NIA officers of Inspector rank to carry out investigations.

Director General of Police (DGP) S P Vaid said the slain terrorist belonged to the JeM and that he was killed in an explosion while an improvised explosive device (IED) was being fabricated in a hideout.

Lucknow encounter: The Uttar Pradesh Anti-Terrorist Squad today launched an operation to flush out a suspected terrorist holed up in a house on the outskirts of Lucknow following inputs that he may be linked to Bhopal-Ujjain train blast this morning.

Both Mohan Singh and Jasminder Singh stated that they were at the time of incident and stood by the prosecution. 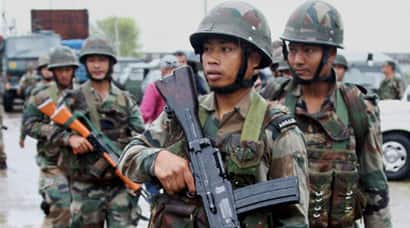 Pampore (J&K), Feb 22 (ANI)The security forces conducted a flushing out operation at the government complex of Entrepreneurship Development Institute (EDI) in Pampore on the Jammu- Srinagar National Highway, where terrorists are holed up since three days. The entire area has been cordoned off as security forces are engaging heavily with the terrorists, who are heavily firing from the building.

Afzal Guru must not be eulogised: Congress

ew Delhi, Feb 15 (ANI): Congress leader Randeep Surjewala on Monday said Parliament attack convict Afzal Guru, through proper judicial proceedings, was declared a terrorist by the apex court and was hanged after a long-drawn judicial process, so Guru must not be eulogised by anyone. He added that the democracy of the country is well-built and strong enough to fight anything affecting the country.

New Delhi, Jan 21 (ANI): Defence Minister Manohar Parrikar on Thursday condemned the recent terrorist attack on the Bacha Khan University in Pakistan. He said any kind of terror attack is reprehended. He expressed his heartfelt condolences to the bereaved families and evoked strong sentiments, saying that killing of civilians or any form of violence is condemnable.

New Delhi, Jan 14 (ANI): Welcoming the action taken by the Pakistan to punish the perpetrators of the Pathankot terror attack, Ministry of External Affairs (MEA) Spokesperson Vikas Swarup on Thursday said India viewed the crackdown on the Jaish-e-Mohammad (JeM) terrorist group as an important and positive first step. Swarup added that India will extend all necessary cooperation to the special investigating team of Pakistan to bring the perpetrators of this attack to justice.

New Delhi, Jan 07 (ANI): Confirming that the Indian Consulate in Mazar-e-Sharif was indeed the target of a terrorist strike, the Ministry of External Affairs Spokesperson Vikas Swarup on Thursday said the reports received from the Afghan authorities on January 6 indicate that the armed terrorists attacked with heavy ammunition. Swarup also said it lasted till the night of January 4 when the Afghan National Defense and Security Forces (ANDSF) were able to eliminate the four terrorists, who had been holed up in a building near the Consulate.