There was always an audience for female-centric films: Aanand L Rai

The Sum and its Parts

The arrangements are all euphoric dhols and drums, pounded to perfection.

The makers of 'Tanu Weds Manu Returns' launched the first look and motion poster of the movie to mark the 28th birthday of Kangana Ranaut.

Sources reveal that while the makers contemplated several titles, director Aanand L Rai felt that 'Tanu Weds Manu Returns' would be lucky for the film.

Kangana Ranaut is to play a sportsperson in the sequel to Aanand L. Rai-directed 2011-film Tanu Weds Manu

Dhanush wishes luck to Anand L Rai for 'Tanu Weds Manu 2', likely to do a song for the film

The sequel of 'Tanu Weds Manu' has got embroiled in a legal tangle.

Don’t think any other actress would've done this role except Kangana, says director

"Kangana has proved out to be the best choice for the film. I don't think any other actress would have done this role because it's a non-glamorous and ugly looking character," said the director. 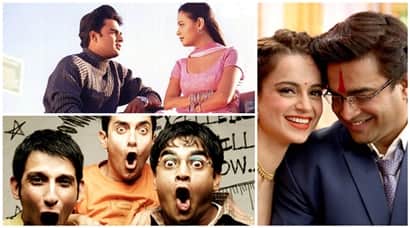 Happy Birthday Madhavan: A look at the actors' best performances in Bollywood so far.