At present, Ustad is lodged at the Sajjangarh park in Udaipur, where he was shifted in May after he allegedly mauled a forest guard to death at Ranthambore.

T-24 not a maneater, bring him back to the wild: NTCA to state govt

Big Picture: The debate on Ranthambore's 'man-eater' Ustad aka T24

As Ustad is moved 400 km away, our reporter goes on the trail of a tiger whose fate is being debated by forest officials, wildlife experts and now the Rajasthan High Court.

The tiger is being sought to be shifted from the wild into captivity owing to alleged pressure from the tourism lobby thriving around the national park. 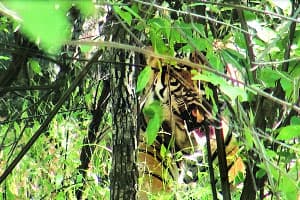 Future Group is eyeing a Rs 18,000-crore revenue from its mobile telephony service.