The 21-year-old Indian from Bengaluru was the second fastest swimmer in his heat and eighth fastest overall.

Swimmer Anita Alvarez fainted in pool, rescued from bottom: What could have caused it?

"Anita’s solo was so good, it was her best performance ever, she just pushed through her limits and she found them," said her coach Andrea Fuentes

According to professional swimmer Amber Fillary, who is also an artist, her passion is water, and she expresses her love of it through sports and art

A man appeared to be drowning. Lifeguards climbed down from their observation tower to rush into a rescue boat. But Magnini was already ahead of them.

"All primary observations point to suicide. As of now, we don't know the reason why he took the extreme step. He was a good student and a talented swimmer. No note has been found. We have launched a probe into the sequence of events leading to his death," said Senior Inspector Pratibha Joshi of Kothrud police station.

His monthly expenditure was Rs 40,000 and his parents had to sell some shares and break some fixed deposits to pay for his fees. 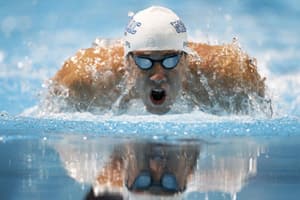 The greatest Olympian of all time plans to swim the same eight events he contested at the last two Olympics.