Pakistani security forces have detained the family of a man accused of attacking Malala Yousafzai,the schoolgirl who became an icon of resistance against Taliban oppression

The Falcon in Flight

Pak girl who stood up to Taliban gets peace prize

A Pakistani girl who spoke out for childrens rights in the restive Swat valley when it was controlled by the Taliban was on Thursday conferred the nations new National Peace Prize. At 11,she wrote about Taliban banning girls' school and she missed watching Indian serial.

The fact that Raymond Davis got acquitted in the double murder case is not startling. They said joining the Taliban was a mistake and called its leadership "anti-Pakistan and anti-Islam."

At least 13 people were killed and 52 others injured on Saturday when a suicide bomber blew himself up outside a heavily-guarded court complex in the restive Swat valley. 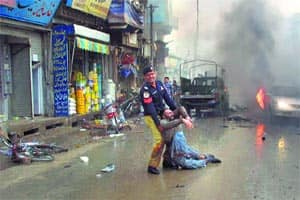 Taliban struck with renewed fury in the Swat valley in Pakistans northwest as a suicide bomber targeted a security convoy near a crowded market killing 12 people and wounding 32 others....