Daniel Kaluuya joins cast of Spider-Man: Across the Spider-Verse

Spider-Man: Into the Spider-Verse will see Spider-Man forced to reteam with Spider-Gwen (Hailee Steinfeld) and a new cadre of Spider-People to face off with a powerful villain.

Here are some of the popular games for the PS4 and PS5 that will go on sale tomorrow.

Tiger Shroff reveals he came 'quite close' to landing Spider-Man role, told Marvel 'I'd save you a lot of money on VFX'

Tiger Shroff revealed in an interview that he had auditioned to play Spider-Man, and that Marvel was quite impressed with what he could do. The role is played by Tom Holland in the recent series of films.

Sony recently shared Spider-Man Miles Morales teaser trailer that shows us what the game looks like. It will be launched on PC sometime this fall.

With never-seen footage, the re-release of Spider-Man: No Way Home starring Tom Holland and Zendaya brought in an estimated $6 million.

Self-sabotage and heartbreak: The real reason why Andrew Garfield was replaced as Spider-Man by Tom Holland

Andrew Garfield had often spoken about his childhood love for Spider-Man, but was left 'heartbroken' by his original stint playing the character on the big screen.

Madame Web hails from Sony Pictures that is developing multiple projects to expand its Spider-Man universe, billed as the Sony Universe of Marvel Characters.

20 years before Dr Strange and Metaverse, how Spider-Man defined a generation

Kuriakose Saju writes: As Sam Raimi returns to MCU, a look at the film that gave birth to a cultural juggernaut.

Irrfan Khan died two years ago. On his second death anniversary, here's recalling the kind words his international collaborators said about him, and the moment he felt the tide was about turn in his favour in Bollywood. 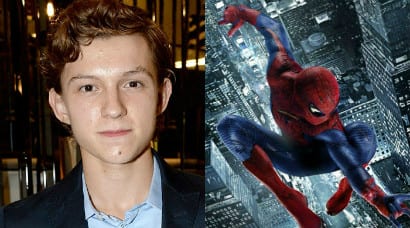 Meet Tom Holland, the boy who will be Spider-Man

English actor Tom Holland, 19, has been picked to play the masked superhero 'Spider-Man' in the film which is slated to release in July 2017. Here's introducing you to the newest Spider-Man through this small photo story.