The India chapter of the International Federation of Film Critics (FIPRESCI) has chosen the top 10 Indian films of all time. See the list here.

Amitabh Bachchan shared how he forged a great bond with co-star Dharmendra, and also revealed that they learnt about safety precautions while shooting action sequences and doing stunts for the first time in Sholay.

Sholay title of iconic film, can't be held to be devoid of protection as mark: Delhi HC

The high court, which said certain films, like Sholay cross the boundaries of just being ordinary words, also awarded damages of Rs 25 lakh to the makers of the movie -- Sholay Media and Entertainment Pvt Ltd and Sippy Films Pvt Ltd -- which had filed the lawsuit against persons using the popular film title to run their businesses.

Amjad Khan's son recalls how producers ran away with Rs 1.25 crore after actor's death, an underworld gangster offered to compensate them

Amjad Khan's son, Shadaab Khan, recalled how producers who'd borrowed money from his father left the family high and dry after his death.

From the epic casting to Dharmendra-Hema Malini's blossoming romance, celebrate 46 years of Sholay by getting to know how the now-iconic film was made by director Ramesh Sippy.

Five mobile games that are actually based on popular Indian movies

In his complaint, convener of the Delhi BJP’s legal and legislative cell, Neeraj, alleged that the video contains morphed clips from Sholay and shows Shah as Gabbar, the villain in the movie, and Delhi BJP chief Manoj Tiwari, East Delhi MP Gautam Gambhir and BJP Rajya Sabha MP Vijay Goel as the dacoits.

On Amjad Khan’s 77th birth anniversary, a tribute to the star whose portrayal of Gabbar Singh remains Bollywood’s pop-cultural apogee

For much of his life, Amjad Khan was branded as Gabbar Singh from Sholay – that ultimate personification of cinematic evil. But he was also a sadistic smuggler, a friend’s friend, a gum-chewing cop and a poetic Nawab. His colourfully kitschy characters made Hindi cinema of 1970s and 80s both memorable and enjoyable.

What is love? Or friendship? The meaning of life? Years of summer vacations spent watching Hindi films taught a young Pakistani girl many filmi truths.

The Delhi High Court imposed a fine of Rs.10 lakh on film maker Ram Gopal Varma and his production house for making the remake of 1975 blockbuster 'Sholay'. It was no less than a ‘Sholay Returns’ as Amitabh Bachchan, Dharmendra, Jaya Bachchan and filmmaker Ramesh Sippy shared the stage for the launch of Hema Malini’s new album “Dream Girl” Amitabh Bachchan addressed the media on August 14, on the eve of Sholay completing 40 years, in Mumbai. Filmmaker Ramesh Sippy, who directed the cult classic 'Sholay', celebrated 40 years of the film at a special function in Mumbai on Thursday (August 13). 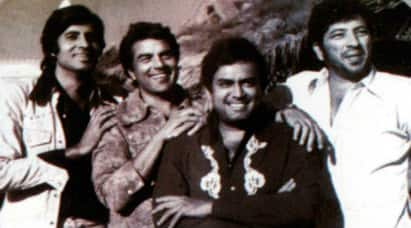