In Andrews Ganj, where Congress leader Abhishek Dutt served as the councillor for two consecutive terms, the party lost to the AAP candidate.

Struggling to revive itself while reeling under factional feuds, Congress has decided to fall back on Sheila Dikshit’s legacy in its MCD polls campaign, projecting the vast infrastructure built in Delhi under her government.

Explained: What the BJP hopes to gain by merging Delhi’s three MCD

The MCD polls are likely to be pushed beyond April as the Centre has communicated to the State Election Commission that it is working to unify the three municipal corporations.

From increasing the strength of doctors to having more flyovers and FOBs and the Metro network, the campaign song touches on the development work done by the party in its 15-year rule.

With various factions eyeing the Delhi Pradesh Congress Committee president’s post, the war escalated to an extent that AICC in-charge P C Chacko was blamed for leaking a letter written to him by former Chief Minister Sheila Dikshit’s son.

Central government sources later said a separate protocol is followed for chief ministers and rejected suggestions that opposition parties were being targeted.

Sheila Dikshit stood by me in my darkest years: Sonia Gandhi

“The meeting was ongoing when reports of issues surround J&K arrived and therefore the meeting has been stopped. The government needs to tell the people what is happening in the state with complete transparency," Rahul said.

Rozanama Rashtriya Sahara on July 26 compared the 1980s to now, when the “then Congress government led by Rajiv Gandhi had tried to interfere in Muslim personal law”

Journey in politics: Sheila, in her own words: CWG to December 16

The end of her CM-ship was marred by another controversy, CWG 2010 — from alleged irregularities to pitiable condition of the Games Village. Before the Games began, Dikshit “spent over six hours daily at the Village”.

Former Delhi chief minister and Congress leader Sheila Dikshit passed away at a private hospital in Delhi on Saturday.

After being soaked in hectic election campaigns and rallies for Delhi Lok Sabha polls, the women candidates unwinded in varied ways like running daily errands, spending time with family or reading their favourite book. 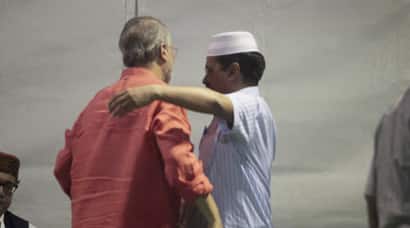 Arvind Kejriwal as CM, Modi's radio address: Pictures that made headlines in 2014

Arvind Kejriwal was the chief minister of Delhi for 49 days and Narendra Modi swept to power at the Centre after a decisive mandate. 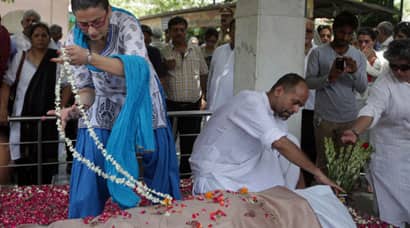 Family and friends bid farewell to veteran actress Zohra Sehgal, who was cremated in New Delhi on Friday (July 11).

New Delhi, Jan 17 (ANI): Inaugurating the six-lane elevated road from Mangolpuri to Madhuban Chowk, Delhi Chief Minister Arvind Kejriwal on Sunday said that all government hospitals in Delhi will provide free medicines and medical tests from February 1. Kejriwal further informed that the Aam Aadmi Party (AAP) has saved Rs 350 crore in last two to three months from the construction of elevated roads. He also thanked former chief minister Sheila Dikshit for giving a green signal to these projects and further praised PWD engineers for saving such huge amount of money.