Shraddha Kapoor is feeling the love of her seven million followers on Instagram.

Purab Kohli, who will be seen in "Rock On 2", says the sequel is not made just for the heck of it but has a good story.

Farhan Akhtar gets present from 'Rock On 2!' director

'Rock On!! 2' is a completely new story: Farhan Akhtar

Farhan Akhtar says  "Rock On!! 2" is a "new story but with the same characters" from the original 2008 film.

The shooting of “Rock On 2” is nearing its end, and Farhan Akhtar has thanked his team for it.

Arjun Rampal back in 'Rock On 2' mode

Actor Arjun Rampal, who earlier starred in 2008 rock musical drama "Rock On!!", has returned to the set of its sequel.

I will definitely work with Farhan Akhtar in future: Abhishek Kapoor

"Fitoor" director Abhishek Kapoor says he will definitely team up with the actor in the future.

Shraddha Kapoor to shoot 'Half Girlfriend' after 'Baaghi', 'Rock On 2'

Shraddha Kapoor said, "I'm very excited to be working on 'Half Girlfriend', I'll start shooting for them after 'Baaghi' and 'Rock On'."

'Rock On!! 2' about conflict in North East: Farhan Akhtar

Actor Farhan Akhtar says his upcoming musical-drama "Rock On!! 2" focuses on the conflict in the North-East region of India.

Farhan Akhtar starrer 'Rock On 2' to release on November 11 Salman Khan ends his Goa vacation, Rock On 2 team in thick of promotions

Salman Khan was spotted at the Mumbai airport last night as he returned to the city after celebrating Diwali with his family in Goa. 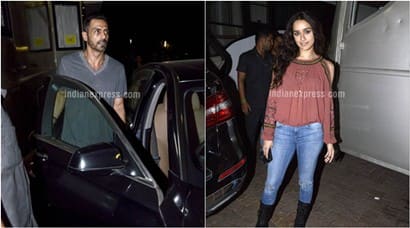 Rock On 2!! lead actors Shraddha Kapoor and Arjun Rampal were seen on the sets of their upcoming musical drama.