Rashmi or 'Vahinisaheb' has always preferred to stay behind the scenes; the attendance at a Thane Puja is out of character but in step with the boost party needs

The Navratri celebration at Tembhi Naka was started by late Sena leader Aanand Dighe, considered to be Shinde's mentor. Since Dighe's death in the 2000s, the celebration has been organised by Shinde and his supporters.

Bal Thackeray’s youngest daughter-in-law is also seen as the hand that rocked the Sena-BJP coalition and helped husband Uddhav to CM seat. With Rashmi Thackeray now editor of Saamana, will her voice — and “ambition” — set the tone for a new Sena?

Two men traveling on a motorcycle were injured at Kalanagar in Bandra on Sunday after their bike collided with a car in which Shiv Sena executive president Uddhav Thackerays wife was travelling. 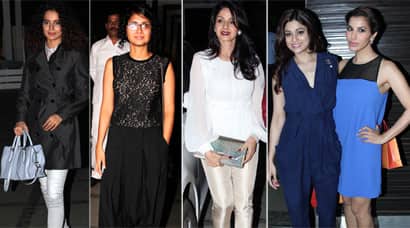 Kangana and Kiran, but no Hrithik Roshan at birthday bash of Sussanne Roshan's sister

The who's who of Bollywood including beauties Kangana Ranaut, Kiran Rao, Sridevi were in party mode at the birthday bash of Sussanne Roshan's sister Simone Khan. But two people who were missing from the scene were definitely the estranged couple Hrithik and Sussanne Roshan.