Ram Kapoor has been maintaining his position as one of the most stable actors in the industry. Born in Jalandhar, he spent his early years of school at Sherwood College in Nainital. Under Amir Raza Hussein Kapoor 's guidance, his love for acting matured. He started his career in 1997 with the television serial, Nyay and the pool of acting offers after it kept him busy until his big break in Ekta Kapoor's famous show, Kasamh Se. He had also acted in many small budget movies in the initial part of his career but it was only later after 2006-07 that he got offers from reality shows and big banner movies. He has participated in Jhalak Dikhla Jaa and has hosted Rakhi Ka Swayamwar. Till date he has acted in close to 20 movies, few of them being Udaan, Student of the Year and Agent Vinod. The actor will soon be seen reuniting with Sakshi Tanwar for an upcoming web series by Ekta Kapoor.

Ram Kapoor was last seen in the Disney Plus Hotstar film Big Bull. He has recently resumed work on his next project.

Abhay 2: Ram Kapoor's avatar in this web series will surprise you

The latest promo of Abhay 2 introduces the audience to Ram Kapoor in a never seen before avatar. He plays a criminal who has made a mess out of Abhay's (Kunal Kemmu) life.

Sanjay Mishra, Ram Kapoor starrer Bahut Hua Sammaan will be set in Varanasi. The movie revolves around the lives of two young engineering students known for their quick con jobs in their college circuit.

Ram Kapoor on his transformation: Had to take time off from work to achieve my weight goals

Ram Kapoor has undergone a transformation and has shed a lot of weight. The actor, who has been away from the limelight for quite some time now, teased fans with his latest photos.

Have you seen Ram Kapoor's weight loss pictures? Here's how you can get a lean frame too

Karrle Tu Bhi Mohabbat 3 trailer: In the over two minutes long video, we get a glimpse of the twist in the show that chronicles the life of superstar Karan Khanna (Ram Kapoor) and Dr Tripura Sundari Nagarajan (Sakshi Tanwar).

Ram Kapoor on hosting Zindagi Ke Crossroads: The audience will get to see the real me in the show

Hosted by Ram Kapoor, Zindagi Ke Crossroads will air every Wednesday to Friday at 8:30 pm on Sony TV. The show will be helmed by fashion designer and producer Shabina Khan.

Ram Kapoor on comparison with Salman Khan: Will shoot myself before I compare myself to him

Zindagi Ke Crossroads on Sony TV will present relatable life-altering narratives inspired from the drama of life, and before a crossroad decision is taken, it’ll be put forth to the studio audience, who, along with Ram Kapoor would discuss the situation.

Actor Ram Kapoor has shed weight and his new look has taken over the internet. Ram shared his transformation photos on Instagram. 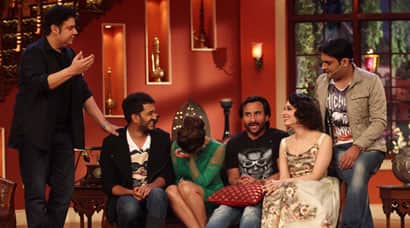