Introduced by Union Minister of State for Home, G Kishan Reddy, the Raksha Rashtriya University Bill 2020 was passed by the Lok Sabha on Sunday. With this, the RSU will get the status of Central University.

The university suspected that Pandya resorted to illegal means to clear the written as she failed to answer a single question during the interview. 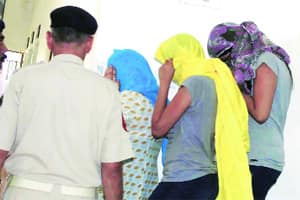 Eight college students,including six girls,were arrested under the Prohibition Act for consuming liquor at a flat in the posh Bodakdev locality of Ahmedabad on Sunday morning.

The residents of Lavad village in Dehgam taluka of Gandhinagar district on Tuesday decided to take out a protest rally against the setting up of the Raksha Shakti University on July 13.

The Raksha Shakti University set up amid much hype a year ago has now launched a post-graduate diploma course in police sciences. Chief Minister Narendra Modi today said it is high time that the police and various other security agencies develop modern and scientific methods to strengthen internal security with the help of skilled manpower.

The Raksha Shakti University (RSU) and Gujarat Forensic Sciences University have joined hands to introduce a new course in basic policing for aspiring police candidates in the state,next month.

The Gujarat government has decided to establish a Raksha Shakti University in the state to meet the growing demand of efficient,trained and professional manpower in the police and other security forces.