The ambitious bowlers’ talent scout programme is aimed at finding new talent from the districts after persistent poor results in Ranji Trophy.

‘It is a legitimate form of dismissal’: R Ashwin on Shami running-out Shanaka at non-strikers end

It is the duty of the umpire to declare a player out if he is out, says R Ashwin.

'Going to be a lovely game of chess': Labuschagne makes changes in his game to combat Ashwin

Ashwin took six wickets in five games at an average of 25.83 and an economy rate of 8.15. Three of those came in India’s penultimate game of the tournament against Zimbabwe.

‘I thought you will reach the level of Virat Kohli, Steve Smith, Joe Root, and Kane Williamson’: Disappointed Ashwin to Litton Das

Ashwin spoke about the game plan, strategy on his Youtube channel and also shared the conversation he had with Bangladesh cricketer Mehidy Hasan Miraz and Litton Das.

Ashwin has moved up one slot and is joint-fourth among bowlers along with teammate Jasprit Bumrah after finishing with six wickets in the match.

Overthinking is a perception that has followed me since my debut: R Ashwin

Batting alongside Shreyas Iyer, Ashwin played one of the best Test innings of his career to steer India to a famous three-wicket win from an improbable situation.

I have worked a lot on my backlift, my power-hitting, so the confidence of clearing the field is there, says R Ashwin.

Former India fast bowler says Rohit Sharma and Rahul Dravid will have to tweak their approach of sticking to the “process.”

Hanuma Vihari and R Ashwin, in 42.4 overs, scraped their way for a 62-run stand, which certainly would have made Rahul Dravid proud on his 48th birthday.

Indian cricketers made themselves busy between the second and third Sri Lanka Tests. 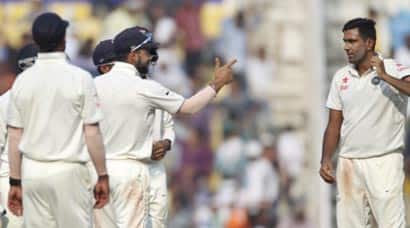 India beat South Africa by 124 runs to take an unassailable 2-0 lead in the four-match series, with a game to go.