7 women among 29 arrested for gambling at Delhi hotel

Over Rs 58 lakh and 10 sets of playing cards were recovered, according to Delhi Police.

“He (the help) had been working for (us) the past 5 years… I was informed that the door locks were damaged… I immediately preponed my flight and reached Delhi. I was shocked to see that all lockers lay in a ramshackle and our jewellery of the last 33 years was stolen,” alleged the complainant as per the FIR lodged on July 21.

Puzzle parking is a fully-automated system featuring a combination of pallets that enable horizontal and vertical movement of parking spots just like a puzzle to park and retrieve cars.

“The victim is in hospital where his condition is stated to be critical. We have registered an FIR on charges of attempt to murder and arrested Sharma from the spot,” the officer said.

The flames engulfed an empty oil tanker and a nearby complex which housed several warehouses and shops.

Woman jumps off balcony, police catch her in blanket

Police said the woman later returned to her house and refused to speak with anyone.

A Delhi Traffic Police constable was killed on Friday night,after the driver refused to stop for a routine check and ran over him

Two groups owing allegiance to the councillor of ward number 8,Basti Jodhewal area,and MLA clashed over the inauguration of a Rs 32-lakh road project in New Shakti Nagar on Sunday.

The child,severely famished and thirsty,had spent 36 hours in the well. 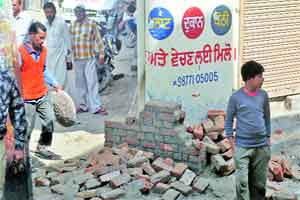 The project falls in ward 8,represented by councillor Bhola,it is also in the constituency of MLA Ranjit Dhillon.