Inviting Pakistan, why not Lanka: DMDK

It may all be a put-on but Sri Lanka,it seems,is having a grand public relations party.

Rajapaksa appealed for a constructive engagement in the Commonwealth on issues like economic growth.

It is for the first time in 25 years that elections will take place in Sri Lankan north.

Succeeded in introducing element of balance in UN resolution,PM to Lanka

US and India are backing island's main Tamil party and is pressurising Rajapaksa's govt for reconciliation. 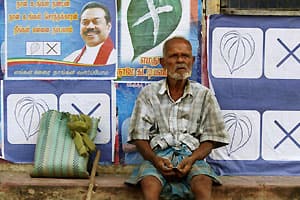 For ethnic Tamils,Lanka is still a hell of haunted memories,military occupation and missing loved ones.

Sri Lankan President Mahinda Rajapaksa and his wife Shiranthi arrived in Shimla on a one-and-a-half-day vacation on Thursday.