Why TRS would rather ally than merge with Cong

Senses it is in pole position after Telangana attains statehood; besides, it has seen where a merger has left Chiranjeevi’s party Ahead of reshuffle,Chiranjeevi meets Sonia

PRP chief had recently stated if 'sorry state of affairs' continues in AP,'target 2014 will be unrealistic'.

Chiranjeevi is nominated to the Rajya Sabha as part of his Praja Rajyam Party's merger with Congress. Chiranjeevi's Praja Rajyam Party had merged with the ruling Congress in August. 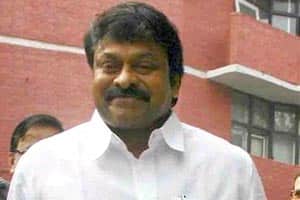 In relief for Reddy,PRP group to protect govt

17-member PRP headed by Chiranjeevi assured AP govt as they would vote against no-trust motion.

BJP appeals parties to back no-confidence motion in AP

Chiranjeevi comes to rescue of the Congress with 16 MLAs of his Praja Rajyam Party.

"I will remain in the Congress for the rest of my life," the actor said. No more films,want to be CM: Chiranjeevi

Telugu megastar was dismissed as a non-entity in AP politics after his party merged with Cong.