PM's thinking is pure like Ganga, no one can stain it: Kiren Rijiju to Oppn in Lok Sabha

People have again reposed faith in Prime Minister Modi, he said, adding the Opposition can not mislead the people now.

PM Modi in Karnataka: Green signal for slew of projects on agenda

After inaugurating the India Energy Week event in Bengaluru, PM Modi will fly to Tumakuru where he will dedicate the HAL Helicopter Factory to the nation and lay the foundation stone for Tumakuru Industrial Township and two Jal Jeevan Mission projects.

Sanjay Singh also said that characterising the Hindenburg Research report as an attack on India was wrong.

The BBC documentary, India: The Modi Question, has been blocked by the Centre using the emergency provisions of the Information Technology Rules, 2021.

The Ministry of Home Affairs has written to governments of all states/union territories and directed citizens to observe two-minutes silence at 11 am in memory of those who had sacrificed their lives during India's freedom struggle.

This will be PM Modi's second visit to Mumbai within a month. On January 19, Modi was in the state capital to lay foundation stones for a slew of projects and also inaugurated the new Mumbai Metro Lines 2A and 7.

However, the suspended students claimed “that was not the end of it. Messages started circulating on some WhatsApp groups asking students to gather at the basketball court.”

Pariksha Pe Charcha 2023: Around 2000 students, teachers and parents participated in the event today. This year the registrations were recorded at over 38 lakh, double from what it was in 2022.

Delhi, Cairo flag cross-border terror, its use as State policy

In 2016, the joint statement had said that the two leaders strongly condemned terrorism in all its forms and manifestations, considered terrorism to be one of the gravest threats to international peace and security, and reaffirmed their resolve to strengthen cooperation in combating terrorism at all levels.

India masks up: States prepare to curb the spread of Covid amid global surge in cases

As India rolls out advisory to curb the spread of Covid-19 in the country amid a surge of infections in China and other countries, hospitals, educational institutions, and other public places can be seen beginning to follow the precautionary protocols since Thursday.

Gujarat polls around the corner, PM Modi in town again

Prime Minister Narendra Modi on Sunday was on his second-visit to Gujarat, ahead of the Assembly elections in Gujarat.

With six lakh plants, here's what the new ‘garden’ terminal of Bengaluru’s Kempegowda Airport looks like 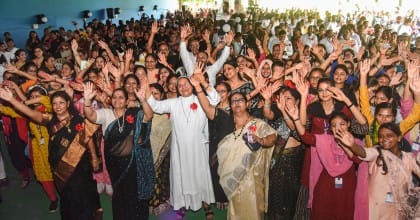 Teachers' Day 2022 was celebrated across the country. President Droupadi Murmu conferred National Award upon 46 teachers. PM Modi interacted with the awardees and launched new schools and upgradation scheme under the PM-SHRI Yojana.

Khadi Utsav event is organised as part of the Center's 'Azadi Ka Amrit Mahotsav' to highlight the importance of khadi in India's freedom struggle.