Matthew McConaughey was chosen for his advocacy efforts after the Uvalde school shooting rocked his hometown. Mila Kunis was lauded for her fundraising — which People said has topped $37 million — for Ukraine, where she was born.

Paul Rudd said he is going to "lean into it hard" and not try to be modest about being selected as Sexiest Man Alive. She says says her most important style accessory is her confidence.

E-mail by publisher describes book as the inside story of life with one of the most controversial figures of our time. The magazine issue,which focuses on 'Most Amazing Bodies' even has the action star giving out his fitness formulae.

He is used to adoring fans but pop-sensation Justin Bieber was pelted with eggs while performing at a concert in Sydney. Salman Khan has been named the sexiest man alive in the latest issue of the Indian edition of People magazine. 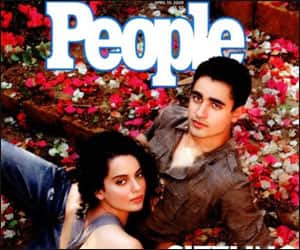 Imran and Kangna feature in this month's issue of People

The issue sees the two Superstars sharing some of their secrets to keep cool in the scorching and sizzling sun.

These are the world's most beautiful women

Actress Jennifer Aniston has been named People magazine's Most Beautiful Woman of the Year, 2016. See which other women earned a coveted spot on the annual list.