According to fire officials, the incident took place around 5.40 pm in Sansad Marg and the driver of the van stepped out of the vehicle when he saw smoke emanating from the engine.

Student leader gunned down in Haryana 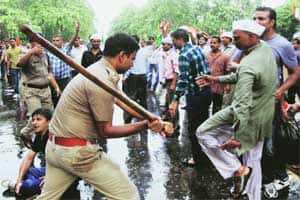 Supporters of Arvind Kejriwal-led India Against Corruption (IAC) laid siege to the heart of the national Capital on Sunday morning,congregating at Jantar Mantar and protesting outside the fortified residences of Prime Minister Manmohan Singh,BJP president Nitin Gadkari and Congress chief Sonia Gandhi.

The Patel Chowk and Central Secretariat Metro stations will remain closed for a few hours.