On November 3, Nathwani had made a comment on the Jamnagar district seats urging political parties “not to give tickets to candidates who would allow crime to flourish in Jamnagar”.

Jamnagar, which is part of Rajkot range has in recent years seen some high-profile cases, including fatal stabbing of advocate Kirit Joshi in public in 2018 and alleged landgrab by Jayesh Ranpariya alias Jayesh Patel.

The YSRCP has four seats going to polls in the Rajya Sabha on March 26, for which it announced candidates on Monday. There are 11 RS seats in Andhra Pradesh.

Nathwani, a native of Gujarat, raised the question in the upper House of the Parliament on Monday and sought to know as to ESZ of how many sanctuaries and national parks had been declared in the country.

Shibu Soren announced Savita Mahato as RS candidate, then changed its mind. In 2008, Soren nominated Delhi’s Kishori Lal rather than his son; he lost. In 2010, JMM chose K D Singh, who is now with Trinamool Congress.

The sailors were not allowed to make any international calls by the Iranian jail authorities.

The Ministry of Agriculture has declared 17 districts of Gujarat as drought-affected among the 85 districts in the country.

Dhirubhais memorial to open for public on Feb 3

The memorial of Reliance group founder late Dhirubhai Ambani will be thrown open to public in Chorwad town of Junagadh district from February 3 in the presence of family matriarch Kokilaben Ambani,sources said today. 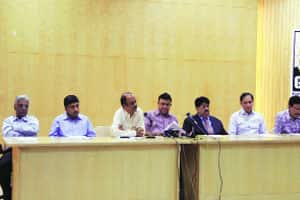 China may not have invested in any projects in Gujarat till date,but a delegation that visited that country along with Chief Minister Narendra Modi,expects it to invest $ 10 billion in the state in near future.

The state governments Pavitra Yatradham Vikas Board and the Reliance Industries Limited are jointly constructing a 125-metre-long and 23-metre-wide hanging bridge to Gomti Ghat at Dwarika with the Panch Kui island in the Arabian Sea.