Shahid Kapoor is left stunned after hearing compliments from 'dad'. Says it is very rare for Pankaj Kapur to compliment the way he did after watching Rangoon

Dad was jealous when I was talking to Alia, says Shahid Kapoor

Shahid Kapoor says his father Pankaj Kapoor was jealous when he was interacting with co-star Alia Bhatt.

Arjun Kapoor dared to say 'yes' to a unique film like 'Finding Fanny'.

Naseeruddin Shah and Pankaj Kapoor were earlier seen in Vishal Bharadwaj's Maqbool (2003) however, they had no scenes together.

I will not marry a girl of dad's choice: Shahid Kapoor

Shahid Kapoor said: He (Pankaj Kapoor) doesn't have to stay with the girl,I have to stay.

The quarter ended March 2013 witnessed a significant year-on-year jump of 20 per cent in house sale registrations in the city.

35% gap in price of sold,unsold homes: Hint on correction required

While most developers continue to hold on to their sky-high rates,the discrepancy in the average price of sold and unsold residential stock in the Mumbai Metropolitan Region (MMR) is an indication of the extent of correction required in the housing market.

Home registrations between January and June 2012 in Mumbai have seen a marginal fall of 3.4% compared to the same period in 2011,showing some signs of improvement in the Mumbai residential property market on a year-on-year basis. The sales velocity in the citys property market has slowed down to a level where it is now the lowest of the six major cities across the country. 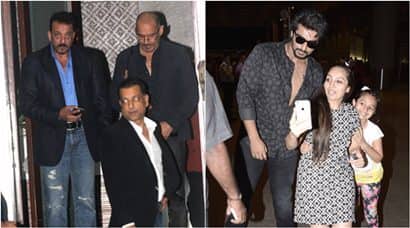 Sanjay Dutt was out on Friday (March 18) evening. Meanwhile, Ki and Ka actor Arjun Kapoor was snapped at the airport where he was spotted by his fans whom he obliged with selfies.