Pakistan's continuing ceasefire violations shows it has no respect for Ramzan: Mehbooba Mufti

In a show of disregard for the ceasefire, Pakistan Rangers resorted to heavy shelling of Indian villages and border outposts that resulted in the deaths of four civilians and Border Security Force (BSF)  jawan. The shelling also left a dozen of civilians injured.

It said that the spy converted to Islam to forment terrorism in Balochistan. 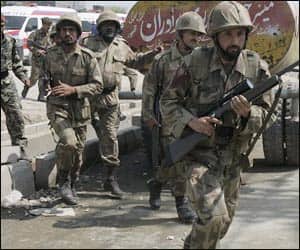 Pak Army claims to have cleared Taliban from S Waziristan

Pakistan Army claimed that its forces waging a tough ground offensive in the lawless South Waziristan tribal region have captured most of the towns.

Amid the quake’s frosty wreckage, a remarkable but bittersweet rescue

The rescue effort in Gaziantep, a city in south-central Turkey near the epicentre of the 7.8-magnitude quake early Monday morning, pulled in dozens of people and drew hundreds of onlookers.

Police said that due to the continuous torture and assault that the girl allegedly endured, she has suffered several injuries

Vijay, from Ghili to Leo: The superstar who wears his simplicity like a shield

Vijay as always wears simplicity as his strong suit and he wears it well. What’s needed is that one film which will kickstart his new milestones. Will Leo be that film? Time will tell.

The bench pointed out that even assuming they are allowed to vote, the “difference between” the petitioners and opposition is “very substantial”.

While You Were Asleep: Ancelotti slams attacks on Vinicius, Vlahovic powers Juventus to 3-0 win, Frankfurt win 4-2

Juventus won at Salernitana in Serie A and that broke the streak of three league matches without a win for the old lady.

Cristiano Ronaldo was handed the No.7 jersey upon his arrival and Masharipov dismissed reports that he did not want to give the iconic shirt to the former Real Madrid star.

Manchester United are due to host Leeds United in the league later on Wednesday.

‘I want Rishabh Pant to recover so that I can go and slap him’: Kapil Dev’s tough fatherly love

Rishabh Pant on Tuesday also gave a glimpse of his road to recovery as he posted an Instagram story for his fans.