Ajinkya Rahane maiden Test ton to put India in a position of strength; New Zealand 24 for 1 after trailing by 246.

Not a shade of blue on pristine whites

After the forgettable loss in the ODI series, Indian batsmen show promise before the big Test ahead.

India lost the fifth and final ODI by 87 runs to go down 0-4 in the five-match series.

New Zealand hammered India by 87 runs in the inconsequential fifth and final one-dayer.

India tour of New Zealand: There is no problem as to why we are not clicking in batting or bowling, says Ravindra Jadeja

Ravindra Jadeja said India are desperate to win the match to turn around the dismal New Zealand tour.

India tour of New Zealand: After the tie, The Noose

Our fast bowlers will have to start using their brains more, says Mahendra Singh Dhoni

It was once again the bowling woes that hampered India in this ODI series against New Zealand.

Away woes continue as India suffer another series loss

Chasing India's 278, New Zealand lost only three wickets as they comfortably chased down the total. 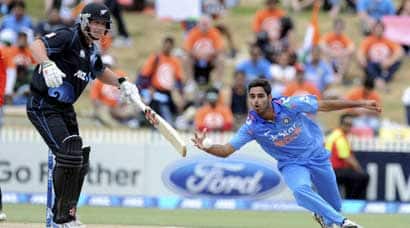 The top ODI side's struggle in alien conditions continue as the Men in Blue lose the second ODI in Hamilton on Wednesday.