A team official also refused to allow any questioning on matters other than the Test.

He believes that the attacking nature of the visiting batsmen will play into the hands of the hosts.

Ryder raises a toast to his second chance

The incident also helped Ryder find out who his fair weather friends were.

India will hope to win in whites against New Zealand and end their winless run in overseas Tests since mid-2011.

Not a shade of blue on pristine whites

After the forgettable loss in the ODI series, Indian batsmen show promise before the big Test ahead.

India tour of New Zealand: There is no problem as to why we are not clicking in batting or bowling, says Ravindra Jadeja

Ravindra Jadeja said India are desperate to win the match to turn around the dismal New Zealand tour.

Canterbury’s George Worker has been called in as one replacement for the practice fixture.

India tour of New Zealand: The dilemma of calling it right

Dhoni has insisted on chasing totals in the recent past, but the move hasn’t proved successful of late.

India vs New Zealand, 3rd ODI: There, but not quite 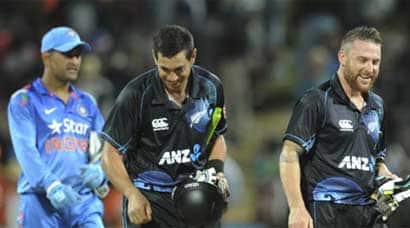