The busting of this module has yet again exposed the direct involvement of Pakistan-based terrorist handlers in pumping narcotics into Kashmir Valley, aiming to destroy the Kashmiri youth, a police spokesman said.

An official said acting on specific information, a team from NCB Mumbai seized 4.880kg charas at Mumbai on Friday.

2,040 kg of narcotics destroyed in Taloja during countrywide crackdown

In Mumbai, the crackdown on narcotic substances was carried out at the Mumbai Waste Management limited site at MIDC, Taloja.

Mumbai: Two held with charas worth over Rs 60 lakh

The duo has been identified as Sunil Nayak (45), who hails from Rajasthan and Nevji Miya (60) from Bihar. The police suspect that Nayak was the one who procured the contraband to be sold off to others.

In 2 operations in 48 hrs, ANC seizes narcotics worth Rs 46L

Why is NCB pursuing the drug user?

Rohan Kothari writes: Law on narcotics was amended in 2001 to focus on dealers, not users. The objective was to stop thinking of and treating the latter as hardened criminals, which they seldom are.

Narcotics being smuggled to Australia, New Zealand via Mumbai

The NCB seized 4.6 kg of ephedrine from Andheri on Thursday. The contraband had been sourced from Hyderabad, sent in-between layers of cotton in mattresses and was destined for Australia via the Mumbai airport. 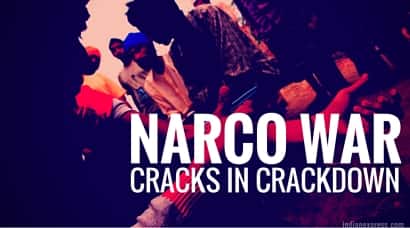 An Indian Express investigation on the narcotics war in Punjab.

Raipur, Feb 08 (ANI): The Congress activists on Monday were seen protesting against Chhattisgarh Chief Minister Raman Singh in Raipur. The Congress activists accused Singh of "misusing" constitutional powers. They staged a fake narcotics test to represent how leaders like Raman Singh misuse their powers for their own benefit and not for the common man. One of the protestors said they will stage protest in Bilaspur, Ambikapur and Jagdalpur on February 9, 10 and 16.