Making art accessible to children, one artist and one artwork at a time 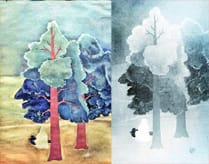 The ‘same’ Nandalal hangs in NGMA, goes under hammer

Titled Woman Sitting Under a Tree, the 20x33.2 cm work with NGMA is currently on display.

Preview for the auction is on at Art Bull, Lado Sarai, till February 21. The auction will be held at ITC Maurya on February 22.

He was holding the hammer when Indian art achieved its record prices. International Director of Asian Art at Christies,Hugo Weihe has been the face of the auction house in India for over a decade. Now,as Christies braces to strengthen its base in India,the New York-based auctioneer is leading from the front. He talks to Vandana Kalra about Christies debut auction in the country and young talent in the region

DURING his tutelage under Nandalal Bose in Santiniketan during the 1940s,KG Subramanyan learned one of his first big lessons in art: it is a reaction to his surroundings as much as it is a mode of personal expression.

Serpent heads in the backdrop of a monotone representation has Shiva sitting in the foreground consuming poison to save the world from their fumes.

In Letter and Spirit

If from one wall Radha stares at you,painted in Kishangarh style,on another,legendary Bengali artist Nandalal Bose seems to be in deep thought.

Recognised as one of Indias foremost studio potters,Devi Prasad breathed his last in the Capital on June 2.