How the relationship soured

Nancy Powell’s tenure was part of a larger drift in the India-US partnership, as bureaucratic pettiness took over.

Nancy Powell's resignation not indicative of realignment of ties: US

The US said the key partnership with India will continue under whoever is named the next ambassador.

Powell has submitted her resignation to President Obama and, as planned for some time, will retire to her home in Delaware before the end of May.

Ending a nine-year boycott, Powell on Thursday met Gujarat Chief Minister Modi in Gandhinagar and said her country looks forward to working closely with the government India chooses after the Lok Sabha elections.

US Ambassador meets Narendra Modi, signals end of boycott, but no word on visa

Powell is the highest-ranking US official to meet Modi since Washington denied him a diplomatic visa in 2005 post 2002 communal riots.

Modi expressed hope that a permanent solution will soon be found on the Devyani Khobragade issue.

US defends meeting with Narendra Modi, calls it efforts to engage with Indian leaders

Reiterating that the US does not take positions in elections of any country, Psaki argued that Powell meeting Modi is not an example of the US taking a position.

US free to interact with Modi, but must apply standards consistent with its policy on human rights: Khurshid 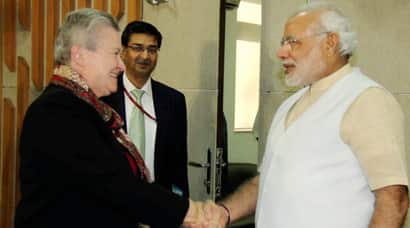 US Ambassador Nancy Powell met Gujarat Chief Minister Narendra Modi at his official residence for 45 minutes along with Consul General Peter Haas and other top Gujarat government officials, signalling the end of the US boycott of Modi since 2005.