Behind One Rank One Pension scheme delay, worry about small hike for jawans

MoD sources said that the main reason behind the delay is the minuscule increase that jawans may get if OROP is implemented in its present form.

Bureaucrats, armed forces now have to get all expenditures approved first.

CBI in its closure report said that guilt of any accused could not be substantiated during its probe.

Duhan said Spicejet had given a confirmation that they would start a Chandigarh-Dubai flight in September.

The meeting was arranged after the Italian firm sent repeated requests for an opportunity to present its case in person.

Helmets for two-wheeler riders,including those on pillion,will be compulsory on Pune Cantonment roads from September 1 and the traffic police will join hands with the military police and army personnel to enforce the rule.

Former Army chief wanted to get back at predecessor: Society in affidavit

The Adarsh Co-operative Housing Society filed an affidavit in the Bombay High Court stating that the former Chief of Army staff,General V K Singh had raked up the Adarsh scam to get back at his predecessor General Deepak Kapoor.

Chandra panel for radical reforms,govt in a spot 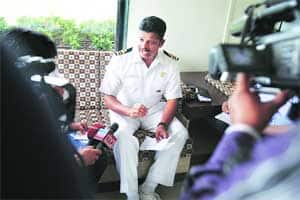