The objective is to ensure that a standard minimum wage rate exists for all kinds of occupations.

The factories, which have hardly been manufacturing utensils since June, have been running losses of up to Rs one crore a day. 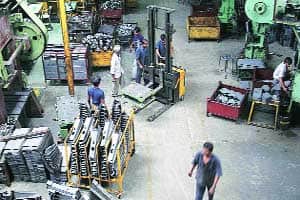 The planned changes also provide for enhanced penalties and imprisonment for defaulters as well a higher compensation to workers.

This could result in a significant jump in salaries of unorganised sector workers, whose minimum wages are currently just about Rs 150 for some professions.

Domestic workers in the state are meant to get minimum wage of Rs 5,000, health care benefits, scholarships for kids, life insurance.

More than 4,000 workers employed by AMC are on an indefinite strike over permanent employments and regular payscale.

Suvidha centres are a one-stop shop for getting works done related to various government departments to facilitate common man.

Over 57,000 cases of irregular payment of minimum wages

In spite of having an healthy employment rate,Gujarat is one of the states having the maximum violations of the Minimum Wages Act.

Another member Anita Dahake said,The contractors are intimidating the workers and preventing them from joining the dharna.