The Military Assistance and Surveillance System (MASS) focuses on the health and environment of a soldier for real-time battlefield analysis. It was awarded the best project during the convocation at the Military College of Electronics and Mechanical Engineering Secunderabad on Thursday.

Military Literature Festival, Sixth Edition: ‘Technology has changed the way wars are fought, not its principles’

The MLF, which is in its sixth edition, was inaugurated at Sukhna Lake by Punjab Minister for Tourism Anmol Gagan Maan. The festival is being jointly organised by MLF Association and Western Command of the Army

With BTS's Jin set to begin mandatory enlistment, a look at countries with conscription

Mandatory or involuntary military service has been around since ancient times with slaves being used for combat in almost all major civilisations.

Two-day military lit fest to kick off on Dec 3

The festival was started in 2017 as a partnership between the Punjab government, HQs Western Command and Chandigarh Administration on the initiative of then CM Capt Amarinder Singh and then Governor VP Singh Badnore.

US vows full military defence of allies against North Korea

US Deputy Secretary of State Wendy Sherman said North Korea's repeated firings of ballistic missiles and artillery in recent weeks were provocative military actions. North Korea has described them as practice runs for the use of tactical nuclear weapons Men of Steel: CLAWS brings out book on military leadership

Titled ‘Men of Steel, Military Leadership for India’, the book is a collection of chapters on the topic of military leadership, the historical facets and the future for which it must adapt in the age of new warfare.

“He visited the Headquarters of the ‘2 Signals Training Centre’ and reviewed the ongoing projects, training and welfare issues,” a press statement said.

The Belgian shepherd is undergoing intensive training as an explosives detection dog for the explosive ordnance disposal and warship regiment of the Hungarian Defense Forces.

The coalition fighting in Yemen said Houthi hit several economic facilities in Saudi Arabia. This comes days after the rebels rejected a GCC invitation for talks on the conflict.

Deputy chairman of parliament committee on relations with neighbors, Viktor Vodolatsky said the recruits would serve in Russia — but that leaves open the option that they could join any future invasion force. 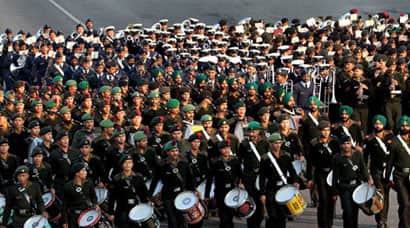 Mumbai, Jan 13 (ANI): Shiv Sena leader Manisha Kayande on Wednesday said that Pakistan is governed by its military and accused the Pakistan military of giving shelter to terror camps. She further stated that Pakistan government has no control on the country’s situation. Kayande said that the attack on Indian consulate Mazar-e-Sharif was a matter of grave concern. She believed that international pressure is required over Pakistan in order to prevent it from shielding terrorists.