The 51-year-old shared that she allows her children to do whatever pleases them -- as long as it is not too extreme.

"Call Mom. Just eat the damn cookie!!" she had written

Melissa McCarthy can be seen sporting Hela's signature green headgear in the photos and videos from Thor: Love and Thunder's sets.

Directed by Rob Marshall, the live-action version of The Little Mermaid will incorporate the original songs from the 1989 animated classic as well as new tracks from Alan Menken and Lin-Manuel Miranda.

The Best Oscar fashions were not on the red carpet. They were on Melissa McCarthy and Brian Tyree Henry

The two actors put on a fashion show when they came out to announce the category for Best Costume Design. they wore elements of the costumes from all four of the nominees in the best costume design category: “Black Panther,” “The Favourite,” “Mary, Queen of Scots” and “Mary Poppins Returns.”

I believe in ghosts: Melissa McCarthy

Actress Melissa McCarthy believes in ghosts. The 45-year-old actress, who stars alongside Kristen Wiig and Kate McKinnon in the new female-led "Ghostbusters" movie, said she has "felt" paranormal activity in her everyday life, reported Femalefirst.

Melissa McCarthy believes women should not "apologise" for wanting equal rights with their male counterparts in Hollywood.

Comedian Melissa McCarthy thinks women sound "dumb" if they do not support feminism. 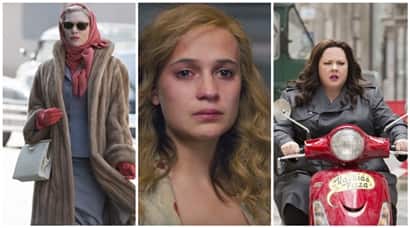 Here are the nominees for Best Actress at 73rd Golden Globes, which will be held on January 10th, 2016.