Suspended SI Pritpal Singh allegedly took gangster Deepak Tinu, an accused in Sidhu Moosewala’s murder, in his personal car to his government residence in Mansa from where Tinu escaped.

More than 100 police personnel were deployed in and around Moosa village in Mansa district and also outside the residence of the Punjabi singer who was shot dead in May.

From April 1-December 15 this financial year, Sardulgarh collected Rs 92 lakh as property tax and rent of panchayat's properties which is nearly six time of what the panchayat collected during the corresponding period in 2021-22

Last week, Agriculture Minister Kuldeep Singh Dhaliwal said that the commission of arhtiyas will be reduced from 2.5 per cent to 1 per cent on the sale of cotton, which received widespread criticism from the state’s commission agents.

The development comes a day after Delhi Police claimed to have arrested two shooters who they said were involved in gunning down Moosewala.

Moosewala was shot dead by unidentified assailants on May 29, a day after the state government pruned his security cover. 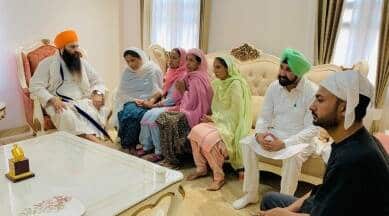 AAP MLA Gurpreet Singh Banawali also reached Dayanand Medical College and Hospital (DMCH), Ludhiana, to meet the two friends of Moosewala who were also injured in the incident. “The government will bear all expenses of the treatment of the both injured people,” he said.

Residents of the area claimed that the shock of Sunday evening's shooting had still not worn off and the decision to keep their businesses shut was unanimous.

In Mansa, no slipstream of progress behind sturdy dissent for rights

🔴 With three constituencies -- Mansa, Budhlada and Sardulgarh – and 5,92,838 registered voters, the district, despite its overwhelming participation in protests for betterment of people’s lives, has lagged in development while struggling to even put an end to farmer distress.

The last rites of Punjabi singer and Congress leader Sidhu Moosewala was performed at his native village Moosa in Mansa district on Tuesday with huge crowds gathering at the site. He was shot dead on May 29.