Meanwhile, many officials could be seen thronging his office to welcome him.

K K Sharma to be the next Chief Secretary of Delhi

KK Sharma's name was one of those suggested by the Delhi government to the Centre.

The UT Adviser KK Sharma,called on the industry to come forward and join hands with the Administration to make Chandigarh a model solar city,by creating innovative,economical and safe solar systems.

The UT Administration officials on Wednesday held a meeting as part of the Chandigarh Heritage Conservation Committee (CHCC) meet.

A local court of Lucknow today granted interim bail to IAS officer Shashi Bhushan Lal Susheel,who was arrested and sent to jail on charges of molesting and attempting to rape a woman on a moving train on Monday.

The UT Excise & Taxation Department launched the online facility of issuance of various statutory forms such as Form-C,F and H to file VAT returns at Confederation of Indian Industry,Sector 31,Chandigarh,on Tuesday. 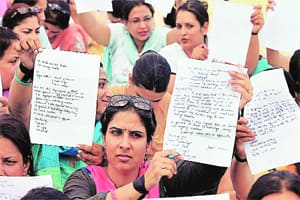 The SSA teachers called off their 11 day protest against mandatory training programmes during summer vacations today.