The Iraqi government earlier said its forces took control of 'vast areas' in the Kirkuk region, including oilfields west of the city, in the early hours of Monday, Iraqi state TV said.

The Kurdish authorities are showing no sign of bowing despite intense international pressure and regional appeals to call off the vote which Iraq says is unconstitutional and a prelude to breaking up the country.

IS militants kidnap around 50 in North Iraq village

It is not the first time IS has carried out mass kidnappings in Iraq.

The Foreign Ministry could not immediately confirm the report but said its embassy was investigating.

Bomb ripped through a crowd of worshipers after the Eid-al-Adha prayers.

Nine died and four were wounded in an apparent dispute between militant groups,when a bomb targeting a vehicle exploded south of the disputed city of Kirkuk.

32 die in blast as US troops leave Iraq

A car bomb exploded in a crowded market in the northern city of Kirkuk on Tuesday,killing at least 32 people... 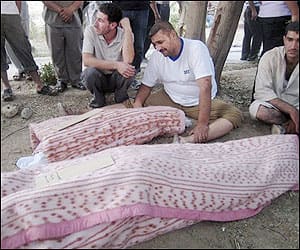 A truck bomb exploded as worshippers left a Shiite mosque in northern Iraq,killing at least 63 people and wounding nearly 200....