NDRF and SDRF teams have swung into action to carry out relief and rescue operations.

“The evidence shows that Uday Kumar, during his tenure, had received huge bribes from red sandalwood smugglers every month.”

Protests on in Andhra,Cong MLAs try to calm supporters

Protests continued in Andhra and Rayalaseema on Saturday with sporadic incidents of violence.

After Kadapa win,Jagan to consolidate support base elsewhere

Jagan Reddy inflicted a crushing blow to Congress in the family pocket-borough of Kadapa. The state forest department is struggling to protect its natural treasure of red sanders from rampant felling by smugglers who are devising new modus operandi every day to dodge the authorities. 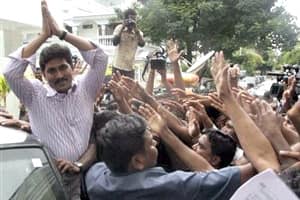 Y S Jaganmohan Reddy,Kadapa MP and son of the late CM,Y S Rajasekhara Reddy,on Wednesday applied to the Election Commission for registration of his yet-to-be-launched political party that he intends to call YSR Party