Northeast United midfielder Gazta’s goal in stoppage time was chalked off for off-side, only for replays to suggest that the strike was perfectly legal

Kerala Blasters vs East Bengal Live Streaming: When and where to watch ISL 2022 live tv, online

Having gone through the various aspects and problems of club football in the country, the delegation then sat down with the national men's head coach Igor Stimac and had an extensive conversation with the Croatian.

Matches are scheduled between Thursday and Sunday, bringing the ISL in line with the top global football leagues.

The 31-year-old defender leaves the club after two seasons and 62 Ligue 2 matches, with a year left on his contract.

Gonzalez, who played 36 out of FC Goa's 42 ISL games in the last two seasons with three goals and two assists, became the first overseas recruit for EB ahead of the season.

The ISL final will be played between Kerala Blasters and Hyderabad FC on March 20.

The second leg, on Thursday, will be the decider but Kerala will go into the tie with an advantage.

The drawn result came less than 24 hours after Kerala qualified for the ISL semifinals. Atletico de Kolkata were a force to reckon with as they ascended to the top of the table on Tuesday. Aishwarya, Aaradhya, Amitabh Bachchan at the opening ceremony of ISL 2

The second edition of the Indian Super League got off to a glittering start on Saturday night (October 3) in Chennai. The event saw the coming together of the Bachchan family. 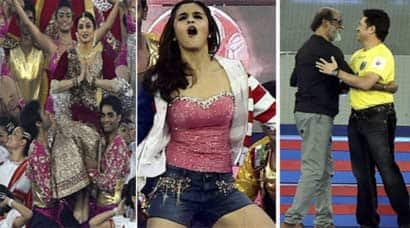 Film stars like Amitabh Bachchan, Rajinikanth, and Aishwarya Rai descended in Chennai to grace the opening ceremony of the second season of Indian Super League on Saturday night (October 3). The 2015 ISL auctions saw India's top 10 footballers being sold to the six franchises to the league. 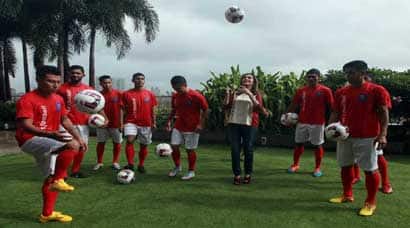 The ISL auctions are all set to take place on Thursday in Mumbai. The 'City of Joy' had more reason to celebrate as the victorious ATK team displayed the ISL Trophy at a mall. Kolkata beat Goa 4-2 in penalties to set up a finals date with Kerala Blasters. 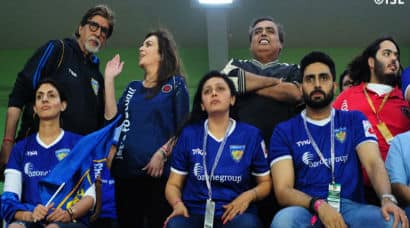 Amitabh Bachchan along with his daughter Shweta Nanda came out in support of son Abhishek's football team, Chennaiyin FC in the second leg of the semi-final play-off against Kerala Blasters FC in Chennai on Tuesday, (December 16).