Follow these tips to educate your child on cyber security

Be creative! Never just use the name of a favourite sports team or band, or a pet’s name. They are too easy to guess, especially if they have previously shared that information online.

Speaking to Indian Express, Prasad said that India has emerged a powerful voice in internet governance and that incrementally, governments across the world are realising the threat of terrorism and are open to government’s role on security front.

China's government considers cybersecurity to be crucial to national security, and espouses the concept of Internet sovereignty, treating its portion of cyberspace as its territory.

Your CCTV feeds are vulnerable, learn how to protect them

India must take its rightful place in global debates on internet governance, surveillance and espionage.

There is a need for formulating globally co-ordinated,inclusive,coherent Internet policies.

Chinese official claims he has 'mountains of data' regarding US hacking

The 'Financial Times' has become the latest victim of internet security breach. 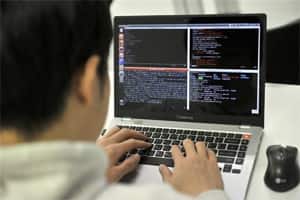 While the origin of the attacks has not been identified,some experts pointed finger at Cyberbunker.