Army Chief Gen Ahmadzai was scheduled to arrive on Tuesday on a three-day visit to explore ways to deepen bilateral military ties in the backdrop of the Taliban carrying out offensive operations across Afghanistan following the withdrawal of foreign forces.

Responding to questions on Pakistan Prime Minister Imran Khan quoting an EU disinformation lab report to accuse India of subversive activities, the MEA spokesperson said that as a responsible democracy, India does not practice disinformation campaigns.

As the talks begin, the Taliban is in a position of strength. If the Kabul-based Afghan political class had succeeded in consolidating the republic and had kept the Taliban confined to a small area, it would have had the upper hand.

As US eyes Afghan exit, India talks to key players

The Indian Express has learnt the government has been “working behind the scenes” over the last few months, as it became clear that Washington is negotiating with the Taliban to enable its exit from Afghanistan.

Karzai is keen to enhance defence cooperation with India and get supply of 'lethal,non-lethal,weapons. 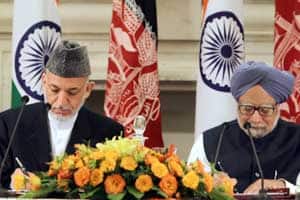