In a talk show, Hugh Jackman admitted that he never used steroids to transform into the Wolverine character. 'I love my job but I don't love it that much'.

After filmmaker Bryan Singer was accused of sexual misconduct by several men a few years ago, the legacy of the X-Men franchise felt tainted in some ways.

In a video posted to Twitter, Hugh Jackman jokingly said, "Ryan Reynolds getting a nomination in the best song category would make the next year of my life insufferable."

Hugh Jackman teases Wolverine and Ryan Reynold's Deadpool relationship in Deadpool 3: 'We hate each other, want to punch him...'

Hugh Jackman, whose return as Wolverine was announced during D23, revealed how they managed to revive Wolverine and bring him into the MCU, assuring fans that Deadpool 3 wouldn't alter the Logan timeline.

When Hugh Jackman's wife told him not to play Wolverine: 'This is ridiculous'

On Hugh Jackman's 54th birthday, here's the story of how he came to be cast as Wolverine, despite his wife's warnings and not being the first choice for the part.

Hugh Jackman will return as Wolverine in director Shawn Levy's Deadpool 3, starring Ryan Reynolds in the titular role. Jackman was believed to have retired from playing the character after Logan.

You don’t want to wear a mask? Do it for Hugh Jackman

After rising steadily for a decade, Broadway earnings have taken an obvious beating over the past two years

Hugh Jackman first tested COVID-19 positive in December 2021 a week after Foster came down with the virus, following which he was also forced to cancel performances of The Music Man.

'We want to feel comfortable, but that doesn't always bring the best results': Hugh Jackman

"If I look back I think some of my more successful things and my point of view have been the things I've been most nervous about,' the actor said.

The performances of The Music Man, featuring Hugh Jackman in the lead, have been cancelled.

From Priyanka Chopra to Justin Timberlake: Celebrities who own restaurants around the world

From Priyanka Chopra Jonas to Sandra Bullock, and more, find out which of your favourite celebrities are proud owners of restaurants around the world. 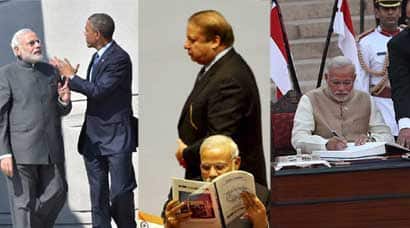 Prime Minister Narendra Modi was the top news and newsmaker in 2014. He led BJP to a historic election victory and formed a stable government at the Centre.