While seeking further custody of one of the accused — 30-year-old Avinash Pawar — Chief Public prosecutor Jaisingh Desai submitted that the SIM was found in the possession of co-accused Vaibhav Raut, arrested from Nallasopara.

BJP slams Digvijaya for Hindu terrorists remark, says he has pointed finger at millions of Hindus

BJP spokesperson Sambit Patra criticised the senior Congress leader for "pointing finger at millions of Hindus, denigrating them and calling them terrorists".

Referring to the purported communication, Ravi Shankar Prasad said, the US envoy even wrote that the Congress General Secretary (Rahul Gandhi) was referring to the tensions created by some of the more polarising figures in the BJP such as Gujarat chief minister Narendra Modi.

“I mentioned the ‘Hindu militants’ term in my report. Even if I change my view, I cannot rub it off. I am not a politician,” says Justice Liberhan.

The Congress hit back, saying that the hostage-terrorist trade-off in Kandahar during the BJP rule had weakened the resolve against terror.

'Terrorism is terrorism, it does not have any caste, creed or religion,' Home Minister Rajnath Singh said.

Role of RSS chief should be probed by CBI: Cong, NCP

National NCP spokesperson Nawab Malik demanded a probe by the CBI or the NIA to ascertain the facts. 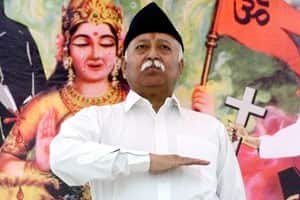 RSS appears to be in no mood to forgive Home Minister for his terror remark and subsequent regret.

Alleging that there was a conspiracy to harass and insult saints.

Investigate conspiracy to kill our leaders: RSS to PM

When contacted,RSS national executive member Ram Madhav confirmed that the letter has been delivered to the PMO.