Dera Sacha Sauda chief Gurmeet Ram Rahim Singh was on Friday convicted by a special CBI court in Panchkula in a 15-year old rape case. Gurmeet Ram Rahim Singh, 50, is the head of spiritual sect Dera Sacha Sauda, which was established by Mastaa Balochistani, on April 29, 1948. The sexual exploitation case was registered against the Dera chief in 2002 by the CBI on the directions of the Punjab and Haryana High Court after anonymous letters were circulated about the alleged sexual exploitation of two ‘sadhvis’ (female followers) by Ram Rahim Singh.

In a written statement, Bajwa said: “To gain political mileage, the [Chief Minister] Manohar Lal Khattar [led] government in Haryana has put the peaceful atmosphere of Punjab at stake.”

Although the Sunday Naam Charcha is a regular affair at deras of Sacha Sauda, this congregation will be special because of Ram Rahim’s presence.

Shiromani Akali Dal said, “Ram Rahim should be shifted to a non-BJP state far from north India like West Bengal.”

Gurmeet Ram Rahim Singh is serving a 20-year jail term for raping two of his disciples, murdering journalist Ram Chander Chhatrapati and hatching a conspiracy to kill a former manager of the Dera, Ranjit Singh.

Dera chief walks out on parole — second time in 3 months, fourth in last 14

Ram Rahim had said in his parole application that he wants to attend an event to mark the birth anniversary of former dera chief Shah Satnam Singh on January 25.

The Dera chief mentioned that January 25 marks the birth anniversary of Dera Sacha Sauda's second chief Shah Satnam. He added that the Dera organises a religious congregation on that day in which free food is served to thousands of devotees.

The high court after hearing the plea told the SIT of the Punjab Police to provide Ram Rahim all such documents that have been relied upon by the investigating agency in the challan against him.

According to Haryana state counsel, the Haryana government will decide the said representation within a week, Arora said while speaking to reporters.

Don’t know if a person on parole can sing or not: Vij on Ram Rahim

Ram Rahim, who is serving a 20-year jail term for raping two women disciples at his ashram in Sirsa, was granted parole for 40 days last week.

Soon after self-styled godman Gurmeet Ram Rahim Singh was sent to jail in a rape case, gossip mills have been abuzz with revelations from his "gufa". Taking a sarcastic jibe at him, an illustrator and graphic artist Saksham Verma doled out a comic series on the Dera chief.

At least 28 people were killed and over 150 injured in the violence unleashed by the followers of Dera Sacha Sauda Chief Gurmeet Ram Rahim Singh after he was convicted in a rape case by a special CBI court in Panchkula on Friday. Thousands of enraged supporters went on a rampage and torched vehicles, government buildings and railway stations after the verdict. 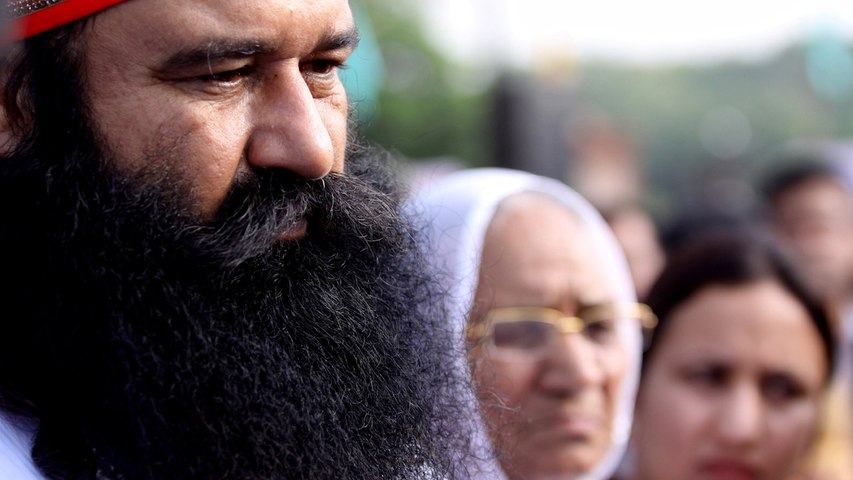 Dera Sacha Sauda's Gurmeet Ram Rahim Singh was sentenced to life imprisonment in a murder case. The godman and three of his followers were sentenced on Thursday. He & three followers were convicted of killing journalist Ram Chander in 2002.

Ram Rahim Is Not A Sikh Leader, Say Pakistani Sikhs

Fatehabad (Haryana), Jan 14 (ANI): Comedian Kiku Sharda has been released after being questioned by the Haryana Police on Thursday since there was no evidence and proof against him. Comedian Kiku Sharda, who plays 'Palak' in a famous comedy sequel 'Comedy Nights with Kapil' was sent to 14 days of judicial custody on Wednesday for mimicking the Dera Sacha Sauda chief Gurmeet Ram Rahim Singh.

Artists should stay in their limits: comedian Raju Srivastav

Kanpur, Jan 13 (ANI): Reacting on the ruling of 14 days judicial custody to Comedy Night with Kapil fame Kiku Sharda for mimicking Gurmeet Ram Rahim Singh, comedian Raju Srivastav on Wednesday said although he is unaware of the entire matter in detail but feels that an artist should maintain some limitations while mimicking. Raju further added that in his 34 year long career he has mimicked almost every politician but has never faced any protest. He stressed that as long one does not insult the National flag or any religion, comedians should be free to express.