According to Turlapati, girl children (including minors) “were shown some morphed pornographic videos and photographs.

Gujarat school that gave land for Nithyananda's ashram gets notice

Nithyananda's ashram was operating out of the premises of DPS (East) School in Hirapur village in Ahmedabad district and recently two disciples were arrested on charges of kidnapping as well as employing child labour.

Nithyananda may have fled India some time back, investigating how: Police

The police are now contacting various security agencies to find out when and how he left the country — his passport had expired on September 30, 2018, and according to police, it has not been renewed due to the trial.

The CBSE directive came on a day Gujarat Police informed that Nithyananda, booked in a criminal case related to his ashram, has fled the country

Nithyananda was later taken to Forensic Science Laboratory, where his voice samples were collected. 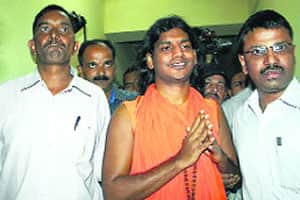 Nithyananda,already facing criminal charges including rape,has been absconding since June 7.