The Bombay High Court directed the authorities to assess the loss and damage suffered by the fishermen within three weeks.

Tamil Nadu has more than 1,076 km-long coastlines and is one of the leading states in marine fish production. The ban was increased from 45 days to 60 days in 2017

The fishing community also demanded that pollution-causing industrial units that are located along the coastline need to be closed.

Raft was being tossed around and crew didnt know where they were headed.

Of the 300-odd families living in the village,half have lost their homes. 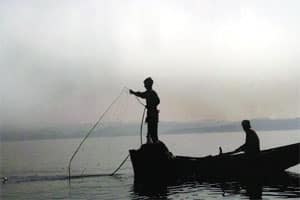 Fish production at Govind Sagar has taken a dip to 956 tonnes,which is much lower than the previous years 1,300 tonnes.

To maintain fishing standards and set up regulations on excessive fishing,the state has decided to carry out a study to assess how fishing-related regulations would impact fisherfolk.

Rapid and unplanned industrialisation along the 1,600-km coastline of Gujarat has raised questions of the livelihood and resettlement of the fishing community in Gujarat.